Did you know this will be last time you can get an in-person autograph with Nichelle?

Now we are making a very limited number of in-person autographs on Friday Dec 3rd.
It will be in a quiet setting in a Suite at the Hotel Indigo near the Convention Center.
Very limited!! Don’t wait these will go fast!
. 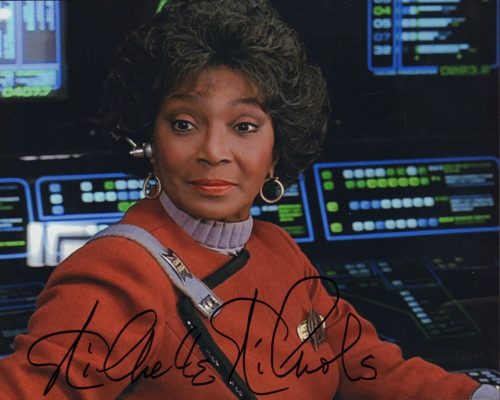 The last opportunity to have Nichelle autograph on a collectible of your choice. This is the moment to tell Nichelle how much she means to you! Very limited signing available. Held at L.A. Comic Con. Don’t wait to order! 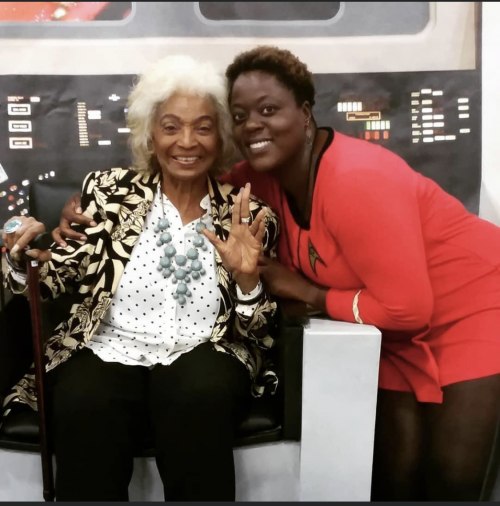 Get you picture with Nichelle on the a stunning partial replica of the Enterprise bridge! Extremely limited! 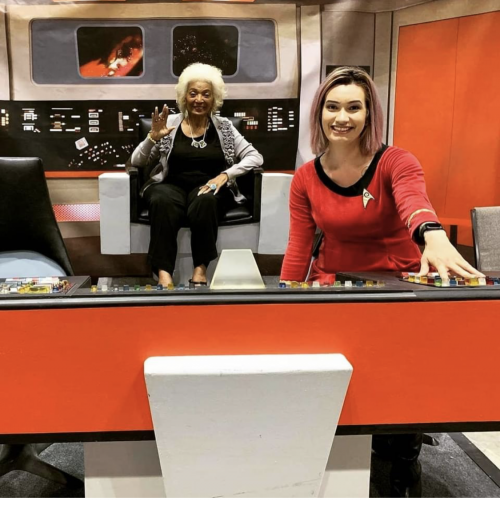 The ultimate keepsake commemorating this very special occasion!! Do we need to tell you how rare and limited this is? 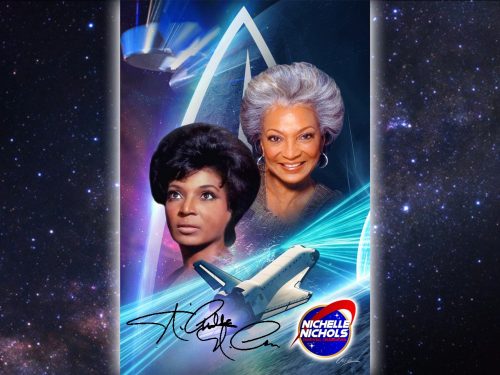 Perfect to obtain signatures by all of the Guest celebrities commentating this monumental event. It’s on heavy card stock so no need to worry about about creases when getting it signed.

Pick up at the Atomic Booth. 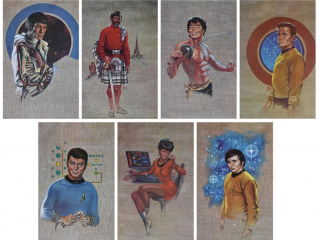 About the artist Frank Kelly Fraes:
Known as the “Dean of Science Fiction Art” with 10 Hugo Awards as Best Professional Artist and countless other awards, Frank Kelly Freas was the most popular and prolific science fiction artist with a career that spanned fifty years. He has illustrated stories by the most famous science fiction writers in the world.  He’s also done covers for record albums, most notably “Queen: News of the World”.
About the artwork:

The first Star Trek convention was held in New York in January of 1972.  The convention commissioned  Frank Kelly Freas, to create portraits of the Seven Officers of the Deck for their convention program book.  Kelly said that Nichelle Nichols was so pleased with her portrait making her look like a pinup girl that she gave him the biggest hug.  Kelly joked that not so pleased was George Takei because Kelly had painted him with Bruce Lee’s torso.  George complained that because of that painting he could never take off his shirt in public and stopped speaking to Kelly for seven years.  All in good fun, though.  He was only joking.  Nearly 50 years later these images are still very popular with the fans. 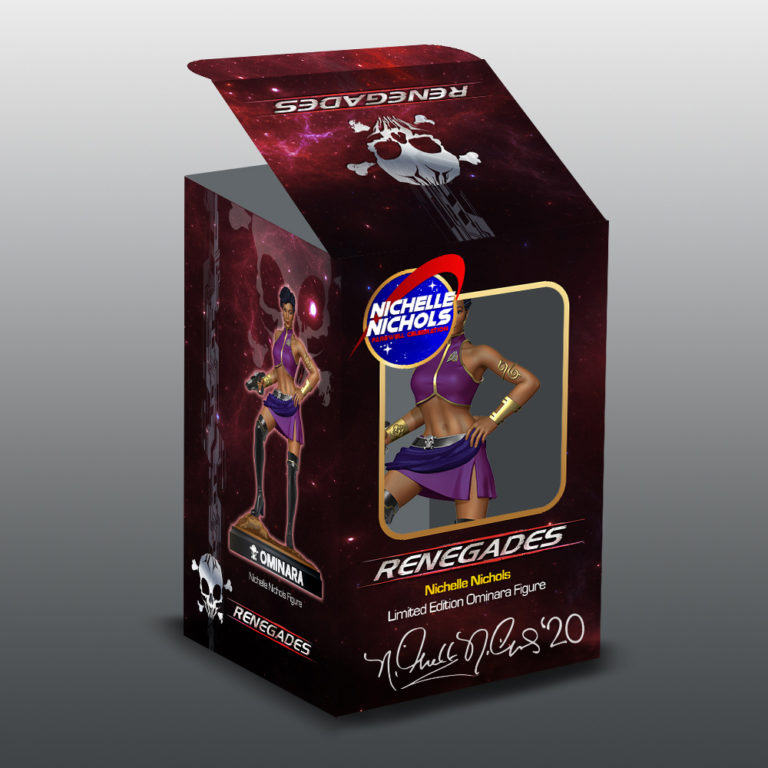 Sculpted by award-winner Ryan Lesser, adapted from art by Marvel artist Admira Wijaya, the majestic essence of Nichelle Nichols is captured within this amazing limited edition figurine. Based on the character of Ominara from the upcoming Renegades series, this 6.5″ figurine will we limited to a run of 1701 with an additional 300 signed copies. Get yours today. *This item can be picked up at Registration during the Farewell Celebration. Approximate shipping date for those not picking up at show is TBD 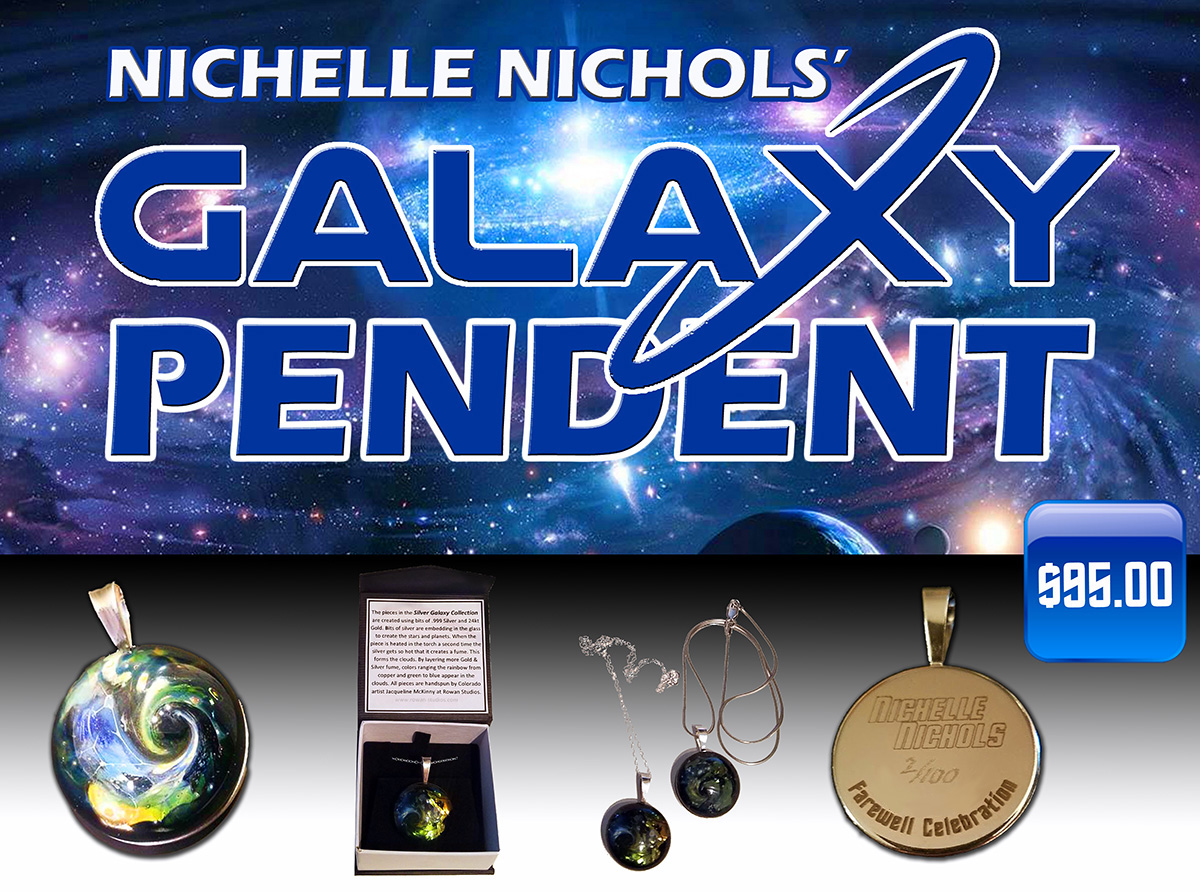 Giclee – Archival, museum quality image, printed on canvas – perfect for framing. All versions will be numbered.
Only 50 of each are available!

With more pins to come, start collecting your set today with the Limited Edition Farewell Show Logo pin and the Nichelle NASA pin. These exquisite collector pins are being created by Fansets, who are well-renowned for their Star Trek products as well as others. Priced to sell quickly, get yours before supply runs out.

Limited to 1701 signed copies, these 8×10 glossy images depicting Nichelle during dual periods in her life (she often jokes that she’s friends with both of these lovely ladies) are perfect for framing. TBD show date will mark the last time that Nichelle will be autographing, so don’t delay.